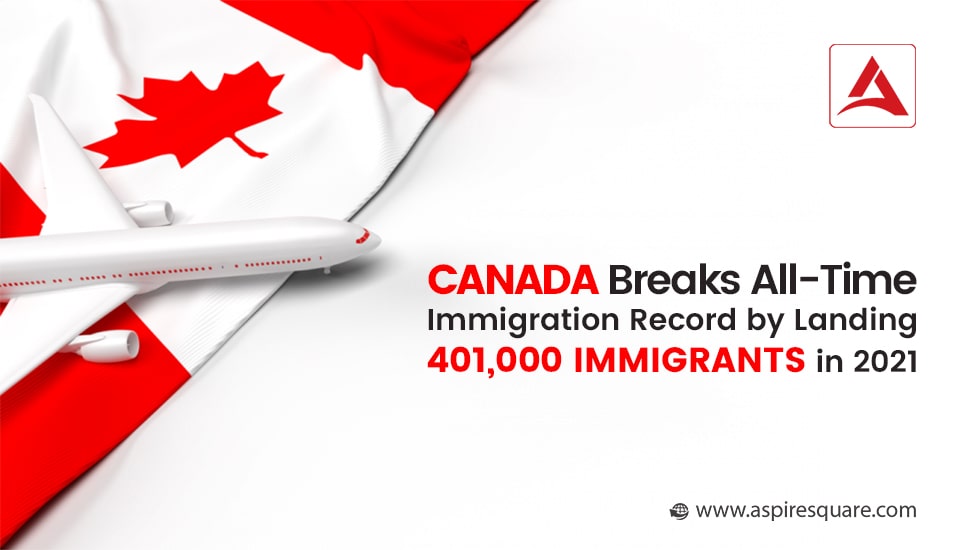 Canada has invited 400000+ aspirants for Canada PR this year. With this, the country has written a new record in its name. From the time it is established, the country has reached this number for the second time. The government of Canada also announced it wishes to invite 4,11,000 new permanent residents in the upcoming year.

The news has been confirmed by none other than IRCC (Immigration, Refugees and Citizenship Canada). The department also revealed that with this move, the nation has surpassed its previous record of highest permanent residence landings in a single year. The only other year when Canada exceeded 4,00,000 immigrants is 1913.

Canada primarily relies on immigration to propel its economy and has made this significant step to accomplish post COVID recovery in a better manner. Statistics that were made available recently indicated that the Canadian economy inevitably enhanced in the former months nearing pre-COVID levels.

Of the new Canada permanent residents, a significant number of people were already residing in Canada on a temporary visa. Prior to the outbreak of COVID, a little number of foreign nationals were living in Canada at the time of obtaining permanent residency, whereas a big number shifted from overseas countries. The situation has been substantially altered in the current year.

The goal was set last year and finally has been attained this year. Just before the COVID-19 pandemic in 2020, Canada established the target of welcoming 3,41,000 new immigrants to the country. The pandamic, however, changed the entire picture allowing only 1,84,000 people migrate to Canada in the last year. However, in this year, the country double down on immigration to encourage its after-pandemic economic growth and set a record of inviting one of the highest new permanent residents in a year i.e. 4,01,000.

The latter accomplishment is extremely noteworthy to tackle the numerous challenges the country is encountering post-COVID.  COVID-19 interrupted the international flow of migrants tremendously. From closed international borders to national shutdowns, everything was disastrous. Especially for the people wishing for overseas immigration, the days were even more painful.  However, by setting a historical record, the  Immigration, Refugees, and Citizenship Canada (IRCC) employees came up big.  To make this possible, IRCC increased its resources, accepted innovations, and moved so much online. Each of these changes is long-term advancements to Canada’s immigration system.

Canada took the goal of welcoming 4,01,000 new immigrants on high priority. Now when the country has achieved the preset objective, it is widening its plans. Canada anticipates greeting 4,11,000 new arrivals in the year 2022 and 4,21,000 in the year 2023. Fraser, Minister of Immigration, Refugees and Citizenship, is expected to announce the new Immigration Levels Plan by February 10, 2022.

It’s clear from the above information that despite the occurrence of toughest times and situations, Canada still has room for talented people and is always eager to fit them into its border. So, if you are dreaming to relocate to Canada in search of a better quality of life and a prosperous future, you have higher chances. Our Canada Immigration Consultants can help you with every detail and guidance you may require to make your aspiration of migrating to Canada come true.