Manitoba has welcomed 1,30,000 immigrants over MPNP’s in 20 years of history

Manitoba PNP is the first Nominee Program that began in 1998. Manitoba is celebrating the 20th anniversary of its pioneering Provincial Nominee Program, which has welcomed more than 130,000 immigrants since its inception in 1998.

The creation of the Manitoba Provincial Nominee Program, or MPNP, made the province the first in Canada to nominate newcomers for Permanent Residence through streams tailored to its economic needs and priorities.

Most Canadian provinces and territories have followed Manitoba’s lead and now have a provincial nominee program, or PNP, of their own. (The only province without a PNP is Quebec, which has a separate immigration agreement with Canada’s federal government)

Ever since MPNP’s came into effect in 1998, Immigration has been the main driver of the net positive population growth that Manitoba experienced since 2006.

The province says its GDP would be 30 percent lower today without the economic benefit of this immigration boom generated by the MPNP, and immigrants who entered the province through its Business streams have invested more than $308 million in the province.

According to the province, an impressive 90 percent of immigrants are employed within their first year in Manitoba, and around the same percentage stayed in the province.

Over the past 20 years, Manitoba has continued to fine-tune the MPNP, introducing a nomination stream for business immigrants in 2001 and adding new skilled worker streams in the following years.

This innovation culminated in 2017 with a complete overhaul of the MPNP in November. A key part of this renewal program was the division of its Skilled Worker Overseas program into two immigration sub-streams, including one aligned with the federal Express Entry system. 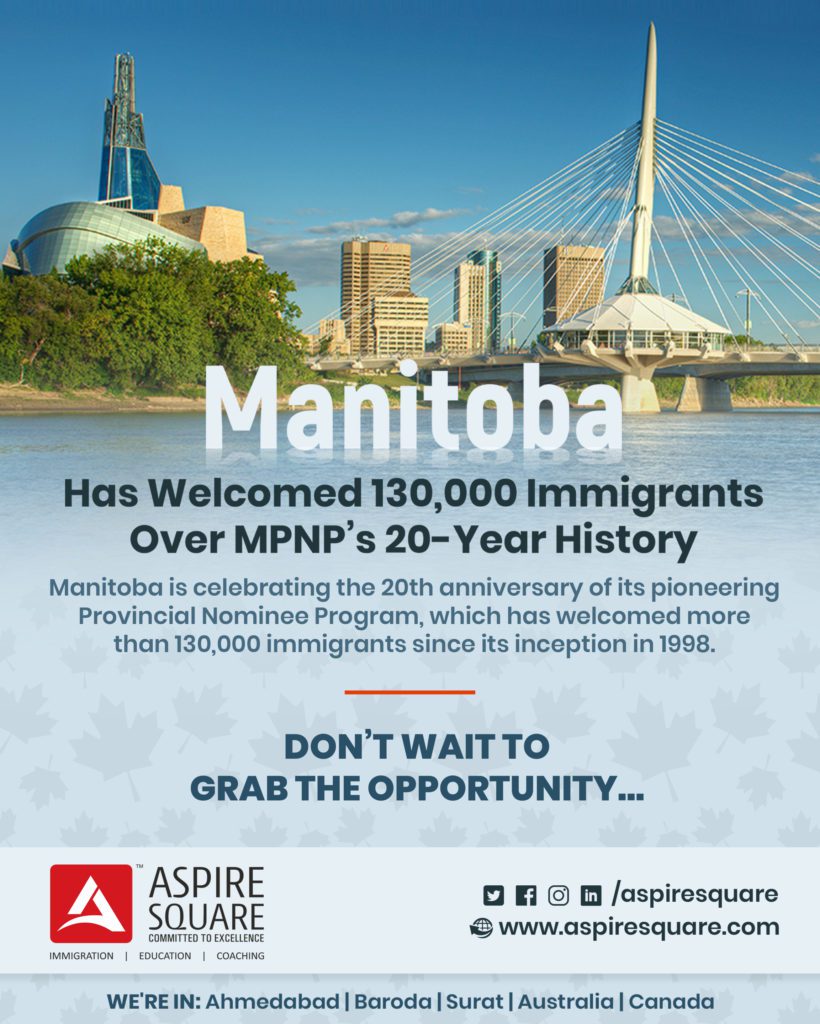 Manitoba’s Express Entry Stream allows the province to nominate Express Entry candidates with a strong connection to Manitoba and work experience in an occupation that the province considers in-demand, among all  other criteria’s

The MPNP has now issued 1,155 invitations to apply for a provincial nomination to eligible Express Entry candidates since the stream has become active in January 2018. Being a Canada Immigration Specialist, Aspire Square would like to provide you the accurate and transparent advice for your Immigration process of Canada.

In order to be considered for Manitoba’s Express Entry Stream, individuals must have a valid Express Entry profile and submit an Expression of Interest to the MPNP.