The automated invitation round for SkillSelect on 3 December 2012 was successfully completed. The table below lists the number of invitations issued:

During 2012 the following number of invitations has been issued:

The following graph shows the points claimed by clients who were invited to apply in the 3 December round: 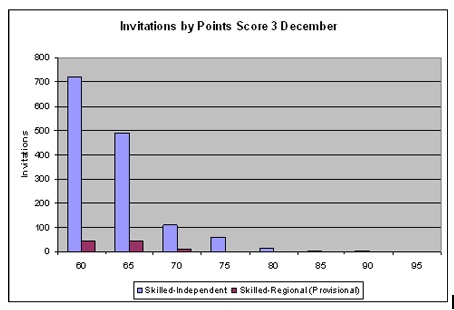 The highest-ranked clients by points score are invited to apply for the relevant visa. For clients who have equal points scores, the time at which they reached their points score for that subclass (referred to as the visa date of effect) determines their order of invitation. EOIs with earlier dates of effect are invited before later dates.

16 November 2012
If you wish to compare your Expression of Interest (EOI) against the outcomes of the invitation round, you can check your points score and visa date of effect at any time for all visa subclasses covered by your EOI on the home page of your SkillSelect EOI.

A year to date summary of occupation groups is updated monthly on the SkillSelect reports tab.

The number of intending migrants who received nominations from State and Territory Governments during November 2012 is shown in the following table:

The number of intending migrants who received nominations from State and Territory Governments from July 2012 to the end of November 2012 is shown in the following table: