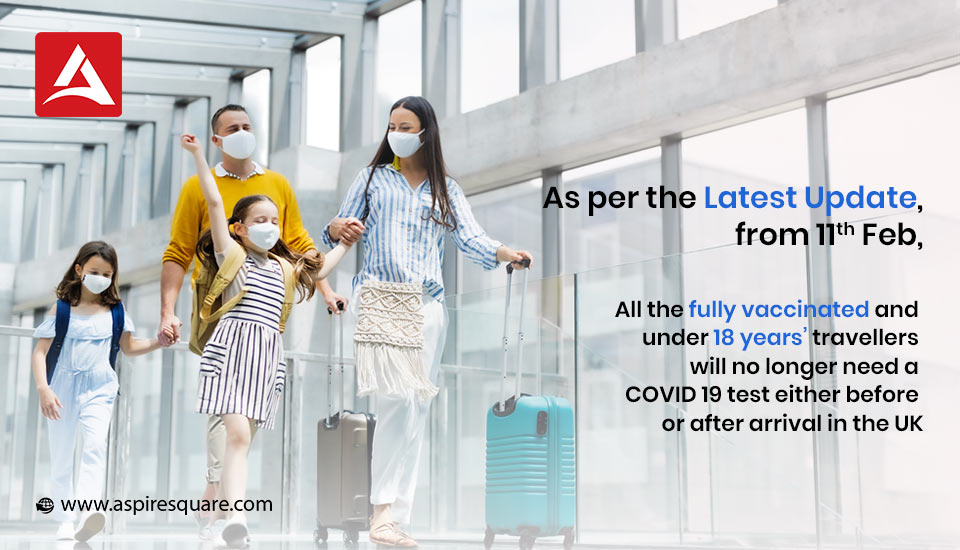 The UK Government has taken one of the significant steps on 2 February 2022. The UK PM Boris Johnson addressed the Parliament and announced that from 11 February 2022 all fully vaccinated and under 18 years’ travellers will no longer need any pre-arrival or post-arrival COVID 19 tests for the international travellers. In addition, travellers no need to be self-isolated on arrival to the UK. Previously, the international travellers were staying in self-isolation once they arrived in the UK until they will receive a negative PCR Report. Moreover, travellers need to take the Lateral Flow Test on the second day of their arrival in the UK. It is also believed that this Lateral Flow Test is more cost-effective than the PCR test.

That means all the fully vaccinated candidates can travel to the UK without any hassle. However, all the passengers need to fill out the Passenger Locator Form.

Travellers who are not Fully Vaccinated

In the UK PM Mr Johnson’s parliament speech, he also added that Indian travellers would also get the advantage of these exemptions. He has mentioned that the government will lift the self-isolation requirement on the arrival of the travellers until they receive a negative PCR Report. The PM has added that the government is also ready to go for further PCR Tests if any positive test comes because it will help to identify any new variants.

The further notes of the PM have added the purpose behind the decision. As per his speech, the COVID 19 pre and post-arrival test discourage plenty of travellers. Many of them have also considered and have a fear of getting “Trapped Overseas”. The UK government is constantly improvising their travelling policies and on the same note previously, they have removed all the countries from their red list.

The UK government believes that as the entire country is fighting against the third ware of COVID 19 and Omicron variant, in between these new changes bring easiness in people’s life.  Mr, Johnson has also requested the people to take the vaccination at the earliest and follow the social distancing protocols. He also assured that the government would like to go ahead with no further lockdown in the country.